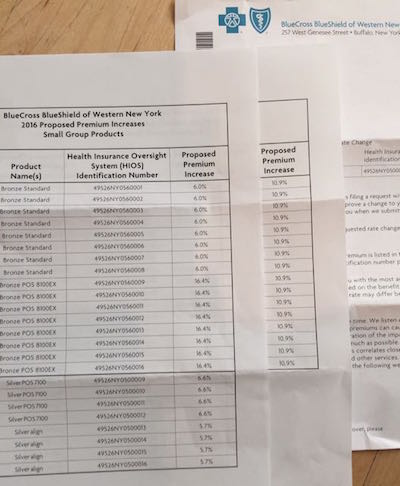 Recently, I received the above letter from our insurance carrier, BlueCross BlueShield, letting me know that for the Nth consecutive year, they are raising their premiums. The letter explains that 2016 premiums will rise between 5.7% and 16.4% depending on your plan. The average employee on an employer-sponsored healthcare plan who receives this type of letter probably doesn't much care and quickly discards it. For employers though, it's a different story. For companies, health insurance is expensive and the bigger the organization, the more expensive and risky it becomes. If you have 1,000 employees and you're paying $521 per month per employee (the 2015 individual average), it's an annual cost of $6.25 million. A 10% annual increase means an extra $625,000 of expense. That's meaningful and the impact of annual compounding makes it worse.

The Kaiser Foundation publishes some of the best research on nationwide health insurance trends. I referenced one of their charts in this article a while back, showing that family premiums tripled between 1999 and 2012 and individual premiums rose at a similar rate. This increase happened despite 2008-2012 being historically modest years of growth in premiums. However, they're now predicting that recent years of modest growth are behind us and premiums are once again poised to increase by larger amounts in coming years (see chart below). Along the same lines, Crain's reported that small business insurance plans are seeking an average 14% increase for 2016. The notice we received from our insurance provider is consistent with these reports. The Affordable Care Act accomplished a lot in providing insurance for more of America's population, but it didn't slow the relentless growth of insurance premiums levied by the for-profit insurance companies in our country.

This was one of several reasons we invested in Sherpaa Health roughly 18 months ago. That thesis has proven correct so far as Sherpaa's customers saw their premiums change by an average of -6% last year. I wrote more about Sherpaa's ROI and customer satisfaction in this post. While these metrics are important to growing a business, it's the magic in their product experience and the resulting industry-best employee utilization that makes Sherpaa special. If you're involved with a company with 150 to 2,000 employees and interested in providing better care for your employees while saving the company money, reach out to Sherpaa to learn more about what they do.

Peak performance in the enterprise

As companies grow in size and scale, they tend to slow down in productivity. This is well understood among…

More and more of the companies I meet are serving lunch to their teams, either every day or 2-3…