There’s more news coming from more sources than ever before. In recent years, I’ve struggled to keep up with real time news to the extent that I want and I suspect this is something that many of us in the technology industry feel. Between mainstream media, blogs, twitter and aggregation services, it’s conceivable that someone could spend half their days keeping up, and I suspect some people do. Last week, some news hit the wire about changes at Softbank Capital and it was interesting to see who sent me emails within five minutes of the news hitting.

Over the past few years, I’ve developed a reasonably effective method for keeping tabs on the news that matters most to me by cobbling together a few services, apps, public rss feeds and a few privately hacked ones. With the exception of the NY Times iPad app - which remains one of the best user experiences I’ve seen - I consume most of my news via RSS feeds, which I store with a service called FeedBin. FeedBin acts as a master repository and back-end of sorts for all my RSS feeds and I pay $30 per year to have them deliver that service. Through FeedBin, I’ve setup folders by topic and authenticated a number of other apps - Pocket, Twitter, Email - for easy sharing. For the front end, I use the Reeder app on both iOS and Mac desktop. I like the UI and it’s a pleasant reading experience. Reeder isn’t available on Android, but I used Press last year with similar results. A few years ago, many news publications published only partial feeds, but luckily most have come around and now publish full text feeds. I use Pocket as my “Read Later” app and made the feed of my unread articles public and stored it in FeedBin for easy access in one central location. One of the nice things about this setup is that read/unread content stays in sync across devices. Reeder and FeedBin speak to each other so when I read an article on my iPad or iPhone, it’s marked as read in FeedBin and will appear that way when I access Reeder from any device. Conversely, I can mark an article as unread if I want to come back to review it later. If I skim a feed, I can mark the whole feed as read and only new items in that feed will appear the next time I open Reeder. The image below is a screenshot of my experience inside Reeder.

For a long time, I struggled to find a digestible feed of Hacker News, but after some searching today, I found this GitHub page courtesy of Gianluca Borello which parses and filters the firehose in a number of useful ways. I look forward to keeping better tabs on Hacker News going forward as a result. Thank you Gianluca.

Lastly, I’ve gleaned a lot of these learnings from my favorite news junkie, Pete Rojas, so need to give him a shout out for indirectly inspiring this post. 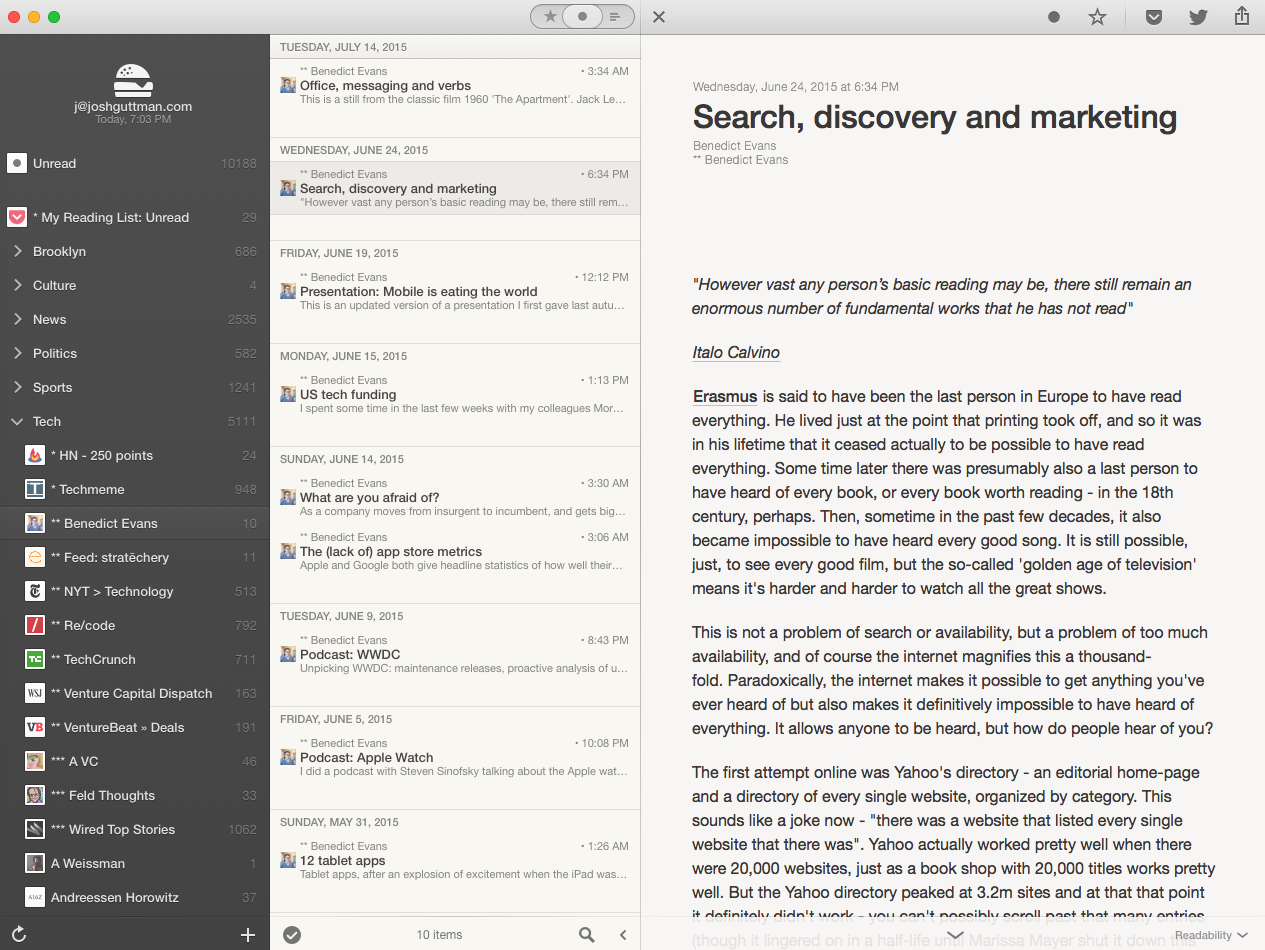 Last week, after a two year hiatus, my wife and I moved back to Brooklyn. We were both longtime…

As mobile eats the world, our connectedness to our devices continues to rise at dramatic rates. Stand on any…