I’ve been playing fantasy football for over 10 years. I play with a group of very old friends and we have fun with it every season. I don't consider myself a big fan of professional football (lost interest in my 20s living on the west coast where games start mid-morning) and may only watch one or two games all season, so my primary connection with the NFL is via my fantasy football league.

Since the beginning, we’ve used CBS Sports (formerly Sportsline) to host our league. I don’t know if it’s the best, but our league settings and teams are already setup which makes switching costs higher than we want to consider. Their product has evolved nicely over the years and come a very long way. CBS typically ranks behind Yahoo as the 2nd largest fantasy football business with ESPN and NFL following behind. The Fantasy Sports Trade Association claims there are 41 million fantasy players, up from 12 million just ten years ago. 75% play fantasy football, by far the most popular of the products, though others are also growing. In 2013, fantasy football generated $11 billion in revenue, slightly more than the NFL primary market, an amazing statistic to consider. With these numbers, it's no surprise that the leaders in the category are doubling down on their products. 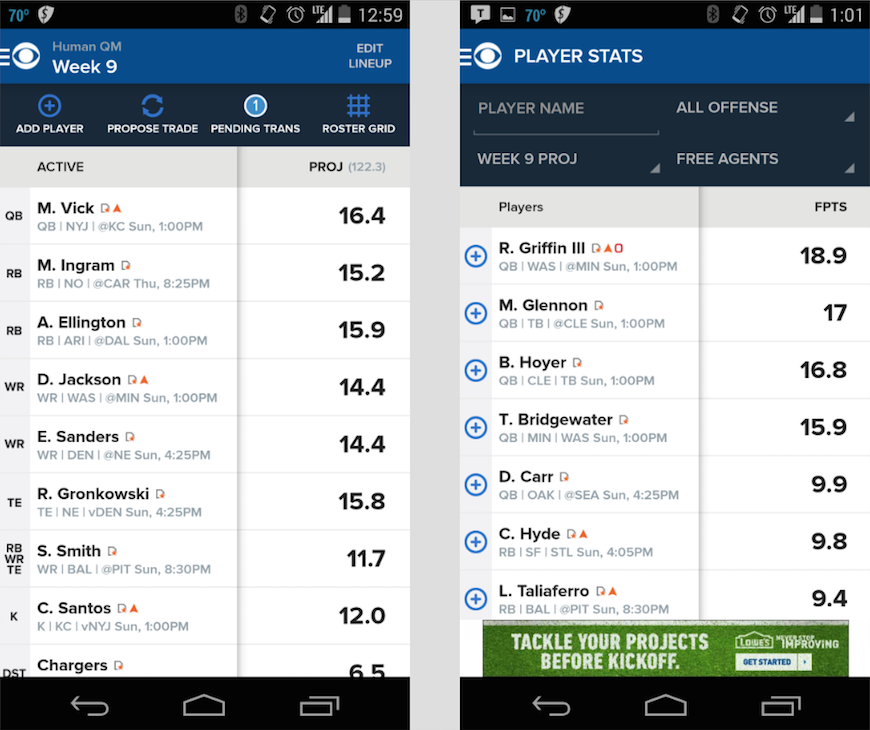 In the venture community, we talk a lot about mobile first products and developing for the mobile user. CBS Sports has now done that, but with a fantasy product that has been around since the early 2000s on desktop. Their mobile apps have been getting better and better every year, but this year, for the first time, I believe mobile has overtaken desktop in quality of user experience. For the first time, I find transactions on mobile to be more efficient, requiring fewer clicks compared to desktop, where I more frequently get lost. I can’t recall another product I know as intimately where I’ve had this experience of mobile catching up to overtake the desktop. It’s a huge accomplishment and something that deserves to be applauded. CBS Sports - along with MLB.com - has been leading the way in sports digital media for years, building next generation product and setting an example for others to follow. Kudos to Jim Lanzone and the team over there for doing such good work.

I first started blogging here at JoshGuttman.com using TypePad in 2004. Around 2007, I got to know the…

Playing the lotto versus the lifetime