A few years ago, I read a book called "American Mania: When More is Not Enough" by Peter Whybrow, who is director of the Neuropsychiatric Institute at UCLA. One of the core tenets of the book is that boom and bust cycles have compressed in frequency and increased in severity since the beginning of the 20th century primarily driven by America’s quest for more financial success, often at the peril of broader market stability. The book was written before the rise of social media, but if it were revised today, I think social media would deserve its own chapter as a driver of underlying behaviors. Fundamentally, markets don’t have minds of their own. Markets move up or down based on psyches of individuals who influence them through a willingness to invest capital or stick that capital under the mattress. A more manic society changes its mood more frequently than a less manic society.

On a meta level, this increased mania combined with the rise of social media gives journalists and independent prognosticators a platform to increase the frequency of boom and bust predictions (and sometimes overreact with those predictions). As an example, see the plentiful and somewhat tired predictions of a technology bubble burst which have raged since at least 2012. Sensationalist media deserves part of the blame, but as participants, we allow it by clicking on the headlines and fueling the fire. I find this topic fairly boring and self-perpetuating so haven’t engaged, aside from some occasional playful tweets.

Since the beginning of the year, there’s been renewed discussion of doom on the horizon and what implications it may have for startups and investors. In the small and cozy world of venture capital, this discussion often evokes Sequoia's RIP Good Times presentation from 2008, which incidentally occurred around the same time that wonderful, category-defining businesses like Twitter, Dropbox, Fitbit, Spotify, Slack, BuzzFeed and ZocDoc were being built. I find it funny how nobody I follow on Twitter predicts boom markets. Nobody takes to social media or their writing platforms predicting a 3-year bull market run, but lots of people are quick to predict the demise of category X or the market as a whole, and have been doing so for years. Such sensational predictions aren’t much different from tech media’s recent fixation on valuation, which fueled the “unicorn" phenomenon, which I hope dies a quick death. Predicting market turmoil or obsessing about valuation make for alluring headlines, but aren’t particularly helpful in building up our industry.

Mark Solon had a great post up in February explaining why the smart founders and investors will stay the course. His main point is that markets cannot be timed, and given the long gestation cycles of early stage businesses, investing through up and down cycles is the only way to succeed. The most successful startups will live through multiple boom and bust cycles, and so, the state of the market doesn’t make a whole lot of difference to the most gifted founders and most promising businesses, aside from a few tactical adjustments that may be required. In this era of personal branding and “noise to signal", the most valuable thing about these predictions is probably the attention and clicks driven to the individuals who are making them. Otherwise, our collective energies are better invested in studying the mechanics of the startup businesses that we love and the founders that make them possible. 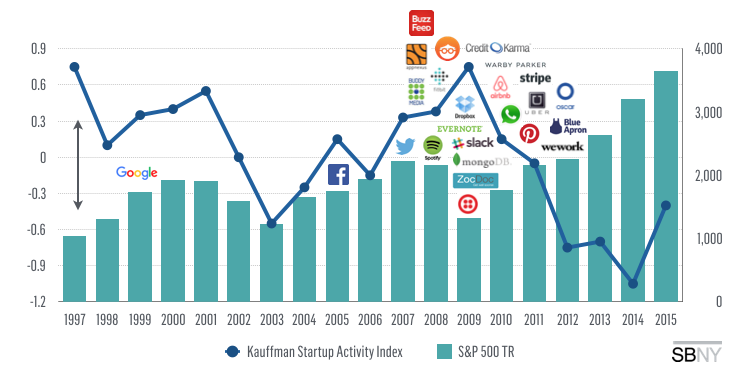 What’s more, market corrections have been inversely correlated to innovation historically. The chart above graphs the Kauffman Startup Activity Index against the S&P 500 Total Return and overlays notable Series A financings - our typical entry point - over the past 10-15 years. With the exception of 2003, when the global technology markets collapsed, innovation has moved opposite the public markets, most notably around 2008-2010, when the financial crisis spurred the creation of $10s of billions in enterprise value. This data tells a good story and so, we welcome the next few years as we believe they will represent the most attractive early stage investing opportunity in recent memory. Fundamentally, market corrections reward patient investors and serious entrepreneurs. They're also effective at filtering out “foreign capital” and wantrepreneurs who may be better served focusing their attention elsewhere.

Two weekends ago, I traveled to Boulder, Colorado with a group of other venture capitalists for one of Reboot’…